Marc Marquez, on Honda, triumphs in Germany Motogp 2018. Behind him is Valentino Rossi (Yamaha) who resists the final comeback of Maverick Vinales, the third. Then Danilo Peterucci, who lost the podium on the penultimate lap, Alvaro Bautista, Jorge Lorenzo and only seventh, Andrea Dovizioso on Ducati, ahead of Dani Pedrosa. It was a perfect the race of the number 93 from Honda. On the Sachsenring circuit, the Spaniard started from pole position: overtaken by Lorenzo and Petrucci, he has not lost his temper, he has saved the tires and then passed in the middle of the race and stretched on rivals digging a furrow, not huge (about two seconds), but never questioned. Intelligent also the test of Valentino Rossi who missed that little bit more to put pressure on the leader of the World. In the drivers’ standings Marquez rises to 165 points, 46 ahead of Rossi, second at 119. 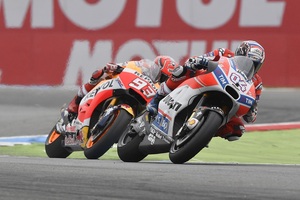 “I’m not really happy, there’s always the same problem with the electronics – explains Maverick Vinales, third on the finish line – it’s impossible to fight for example with the Ducati, however the bike worked well and this third position is wonderful”. “Sachsenring is a very difficult circuit but we are on the podium, congratulations to the whole team”, says satisfied Valentino Rossi. He adds: “I’m happy, it was a fantastic race from the start without making mistakes, it’s a nice way to end the first part of the season and go on holiday”. The winner, Marc Marquez, is emotionally euphoric. “At the beginning it was hard – he explained – the start was not great and it was not easy to pass the two Ducati, then behind Valentino Rossi and it was difficult to manage the tires”. Then it was a triumphal ride. “I tried to take the edge, I knew I was well and after the ninth win this remains a wonderful place for me”, concludes Marquez.