The history of the Honda RC30

Few bikes have exalted sports motorcyclists like the Honda RC30. Born theoretically as VFR 750R, the four-cylinder V-shaped from Tokyo was too racing to not adopt the internal design name in the collective imagination, which has always identified the special projects and racing motorcycles built by the racing department. In this case there was a good reason. The Honda RC30 was built directly by HRC, and was designed with only one mission: to win in races for series derivatives of all levels.
The Honda RC30 was very light (185 kg), had a chassis that seemed to be on par with Wayne Gardner’s NSR500. The suspension was adjustable and there were lots of tricks to make it easier to use in the circuit. Few remember, but it was the first motorcycle to propose the slipper clutch that only a decade later was adopted by other sports. 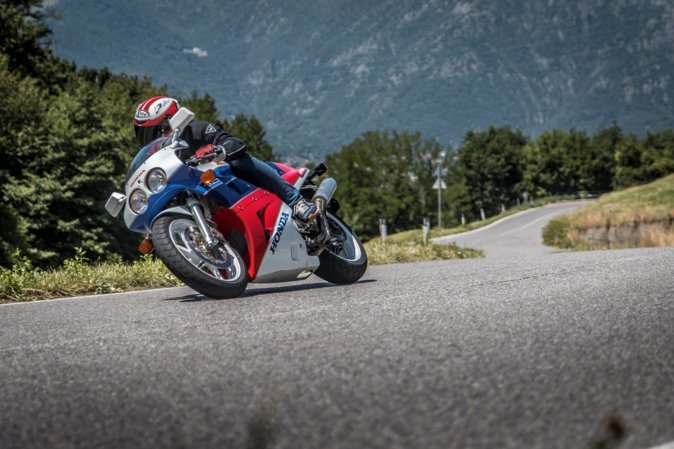 The engine was very powerful for the time (112 horses, more than any other seven-and-a-half) although penalized by a ratio made exclusively for the track (in the first touched 130 km / h). Honda RC30 has hand-built engine, with titanium connecting rods, double radiator with curved profile, light distribution control (but always with gears, as then the tradition on the Honda V4) and an unprecedented phasing of the 360 ​​shaft instead of at 180 degrees, solution used on the official RVF prototype by Endurance.

On a sporting level the RC30 was a revolution, and forced the competition to hastily adjust their 750s. Honda conquered the first two editions of the Superbike World Championship (1988 and 1989) and dominated the national championships for several years; single arm swingarm and quick release brake calipers made it very popular in endurance, where it became one of the favorite motorcycles by private teams for its competitiveness and almost surreal reliability. Several of the less successful teams managed to run an entire season without heavy revisions on the engine.

The Honda RC30 is relatively easily found on the used market, even if prices are not exactly popular for the best-kept samples. In 2018, you can pay for used Honda RC30 about 30,000 us dollars or 25,000 euros. About that, pay close attention to the motorcycles used in the race and then on street. You can find several RC30 models in our market section; economic demands are certainly not popular, but in a few cases like this you can really say that you put a piece of motorcycle history at home. This model, Honda RC30, has only 3,500 units that were produced (1,000 remained in the Japanese market).

The RC30 smells of racing since the first contact. It is small and uncomfortable, especially for tall people. The controls are however very nice. The V4 engine, equipped with the HRC race exhaust, has a wonderful progression. Soft and regular up to 7,000 rpm, from here starts screaming and arrives quickly at 12,000 rpm. The chassis is agile and quick, despite the 18 inches rear rim. It descends quickly like an arrow and changes direction in a flash, but it has a negative effect on the braking.The double front disc has very little power and should be squeezed hard to stop the Honda RC30, this bike can be anything but not slow.